Well, yesterday I thought I  had plans to pop my Manhattan cherry with my friend Messy. In my mind, we were going to start  off our romantic evening with some dumplings in Brooklyn, and then walk across the Brooklyn Bridge to Manhattan as the sun was setting. Understand that I’ve been dreaming about Manhattan my whole life. I’ve watched Moonstruck approximately 87 times, and was at one point in my life, obsessively into the beat poety scene of New York in the 50’s.   One time, I even had a night dream that I was a hasidic new york jew in the 1930’s, with the magical ability to float around in libraries. Because I’ve been dreaming about visiting New York all my life, I felt it was important to make my first entry to the throbbing, sparking, filthy ganglia that is Manhattan  as meaningful, slow, and romantic as possible. Special.

However, yesterday afternoon I got a text from Messy: “I’m at Riis beach, and probably going to be a little late. Can we just meet at Vanessa’s Dumplings? It’s in Chinatown, Manhattan.”

This sent me into a mild logistics spin.  First of all, it would mean walking across the bridge alone. Who wants to lose their virginity alone? Only losers. Second of all, I’d have to find my way to a specific restaurant once I arrived in Manhattan, and I am the type of  person who, armed with several forms of GPS, and with the voice of god shouting down orders from a cloud, could still wind up myseriously in Fremont. And this is in my own neighborhood back home.

Not wanting to engage in a flurry of confusing text messages with Messy, about our obvious miscommunicaation of plans, I explained the situation to Sam.

“Well, I can walk you across the bridge” he said. “then once you get to the other side, I’ll help you map how to get to the restaurant.”

Sam is a good friend.

And so, with began our journey across the bridge–along with throngs of tourists with selfie sticks. Sam, walking with his usual mongoose scamper, and me, like an Oakland Bumpkin with my head in the air going “wow wow WOWWWWWWW” every two minutes. 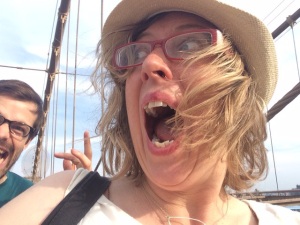 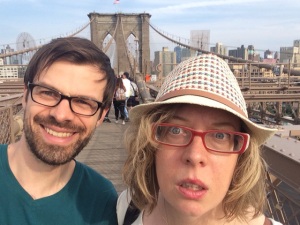 As I got closer and closer to Manhattan, my stupor grew into a mild sort of terror. How would I…Take in this….this BEAST. Here I was, getting ready to lose my virginity to a guy with a thousand foot dick. And as i got closer and closer to Manhattan, I began to wonder if I should have brought condoms and rubber gloves. Maybe some bleachy wipes.  Because this thousand foot dick also appeared to be crawling with some strange sort of disease. But a disease i kinda wanted to catch. Catch my drift? 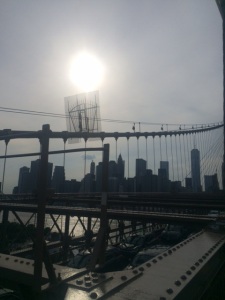 “Okay, here’s your route to the restaurant. It’s not that far from here. You can do it.” said Sam.

And then, I was alone in Manhattan.  With my travel guide on his way back to Brooklyn, I could no longer be a bumpkin saying “wow, dude. Fuckin statue of liberty man!” If I was frightened or unsure of myself, I couldn’t SHOW it. I had to adopt the gait and look of someone who knows what the fuck is going on.

I bravely made my way up Lafayette, into Chinatown, where the smell of old fish, poop, and kimchi cuffed me in the face. Garbage was piled up in the street. There were potholes, and random broke-ass parts of sidewalks and streets,  graffiti everywhere. Even though my GPS was leading me to my destination, I was still terrified I would get lost and end up in a dumpster somewhere, on a bed of rotting peking duck carcasses. But at last, I made it to Vanessa’s dumplings. Safe and sound.  Look at me!

It was so great to catch up with my old friend Messy. She was a little hurt that Sam took my brooklyn bridge cherry, but hey, misunderstandings happen, and no harm done.

Before we left, I had to use the bathroom at Vanessa’s. It seems like every 4th of July for the past two years I’ve had to experience a horrific bathroom scenario. Last year, it was because I got a text from an old co-worker who, whenever I hear from him, I have to poop. (he has that effect on me)  And so I had to stop at the mcdonalds at 24th/Mission to take care of business. I thought that bathroom was the grossest bathroom I’d ever seen- until I used the toilet at Vanessa’s. The entire thing was graffiti BUT SOME OF THE GRAFFITI WAS POOP.

After dumplings, we walked back through the fragrant streets of the lowe r east side, and got back on the subway to Brooklyn, which, turns out, is a freakishly clean and tranquil place compared to where we just were.  We had cocktails on Sam’s balcony, and went to a place up the street called “Art Cafe” where they have sparkly tablecloths, candles, and homemade infusion syrups cocktails. (Side note: every single customer service experience I’ve had since I’ve arrived has been top notch) I sipped a watermelon fizz while Rocky IV played on a building above my head. I felt strange,  otherrworldly, and wondered  if I’d gotten pregnant or a dose of the clap from this monster dick fat apple city. 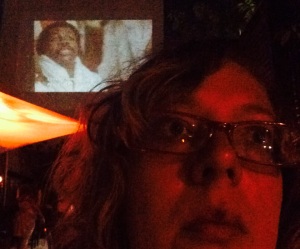 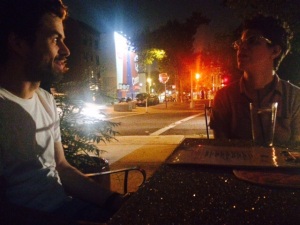 I’ve got three blisters on my feet, 13 mosquito bites, and I’m having a blast.